We have just released an update to the Chronon beta.
This update contains a lot of bugfixes and resolves a lot of severe crashing issues.
We recommend everybody to upgrade your Chronon installation.

We have also increased the beta expiry from March 15 to March 25th.

Please note that recordings made from previous beta are incompatible with this beta release.

As described in the previous post, the Chronon recorder allows you to choose what to include and exclude from recording. We really wanted to keep any sort of configuration required to use Chronon to an absolute minimum. After all who likes to go through boring manuals reading about all the various configuration parameters.

Even though the recorder and debugger allow and fully support method level selection of code, for the sake of simplicity of configuration we decided to allow only class level granularity for choosing which code to include/exclude from recording. We have seen that this suffices for almost all situations. If this does become an issue and lots of people do need method level granularity we will allow config file support for it in the future. You can read more about configuration details here.

Thus the plugin will include all the classes in ‘your’ code however it will exclude all the classes in 3rd party libraries. This way we achieve the initial goal of the include/exclude mechanism in the first place which is to record only relevant pieces of code and leave out all the code that you dont care about, which usually resides in 3rd party libraries.

The include/exclude of classes can be configured in 2 places: 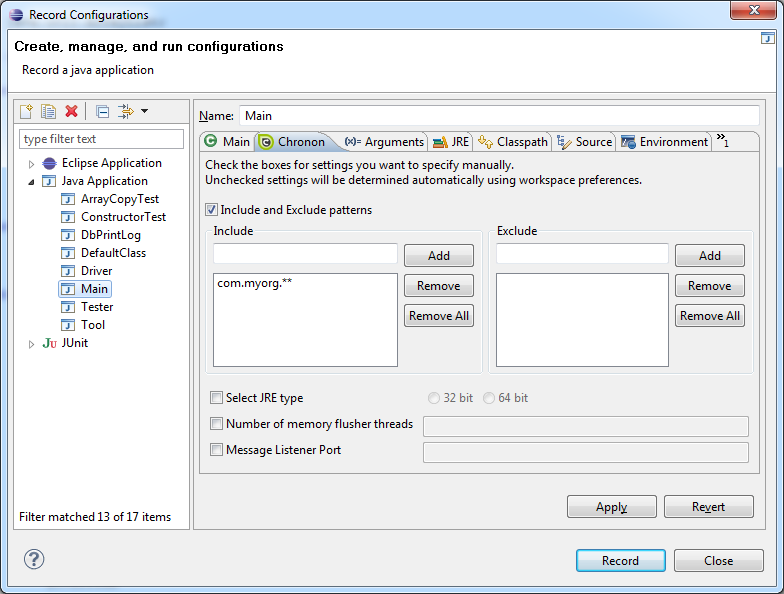 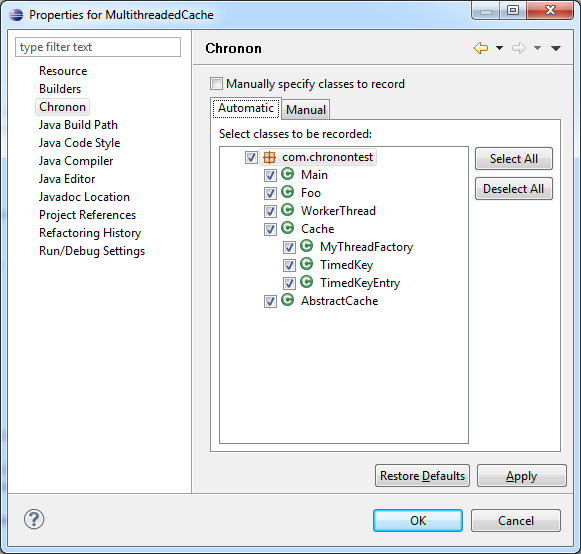 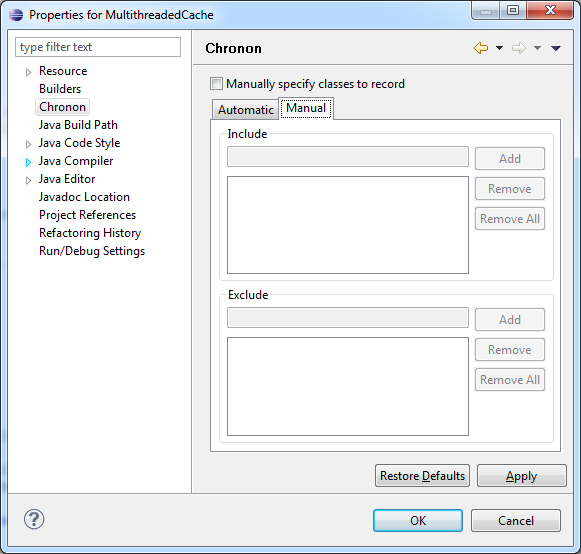 We even allow configuration per project. The automatic tab allows you to visually select which classes to include/exclude. Note that this tab doesnt show any libraries your project uses. This is intentional since this tab really is all about ‘simplicity’. If you want to include libraries or some weird pattern, you can click on the ‘manual’ tab and specify the exact patterns to include/exclude whatever you want.

So today we finally made the long awaited Chronon beta open to all.

Since this is an engineering blog, I aim to clarify who the beta is meant for and under what scenarios it should be used.

The current beta is meant for internal use strictly. We would love for you to try it out in scenarios like development, support, QA, etc. However we do not see this release as being used in production level scenarios where performance is an extremely high level priority.

This is a beta in the true sense that we really want you to evaluate the robustness of the recorder and the time travelling debugger.  We want to hear from you if the recorder crashes under some circumstances or the level of performance you would like it to reach. Similarly for the time travelling debugger, we really want to hear your opinion on whether it helps you find root causes of bugs faster than a traditional debugger.

Keep in mind, ‘beta’ means things will be a little incomplete and sharp around the edges. For one, we the current eclipse plugin doesnt have great J2EE integration (will be there in final release).

Even though we have tried to keep the UI of the debugger familiar to that of the traditional debugger, when you are in hardcore debugging mode you will realize how different it actually is. We know that this new UI will cause some surprises for the new users. Thus we have added a bunch of videos showcasing some scenarios how Chronon should be used. This blog will also be updating very frequently from now onwards to tell you about all our design decisions and have a nice discussion with everyone before we reach the final 1.0 release.

Consider this line of code which reads in the contents of a file.

The method readFile() in this case could belong to some third party library, the JDK or may even be a system call.

As far as debugging our application is concerned, we are not worried about what happens inside this method. And that is because we never wrote it in the first place. It is entirely possible that we may not even have the source code to this method. The only thing we care about when we debug our program is what the arguments and return value to this method were, which in this case would be the file name and the returned byte array.

Thus the central observation being -

We utilize this observation inside the Chronon recorder to achieve performance. The recorder is designed to record only the code of ‘your’ program.  For calls to all methods that reside in a third party library, or the JDK or native method calls, we only record the arguments and return values of those methods, since that is all that is needed to debug your program. 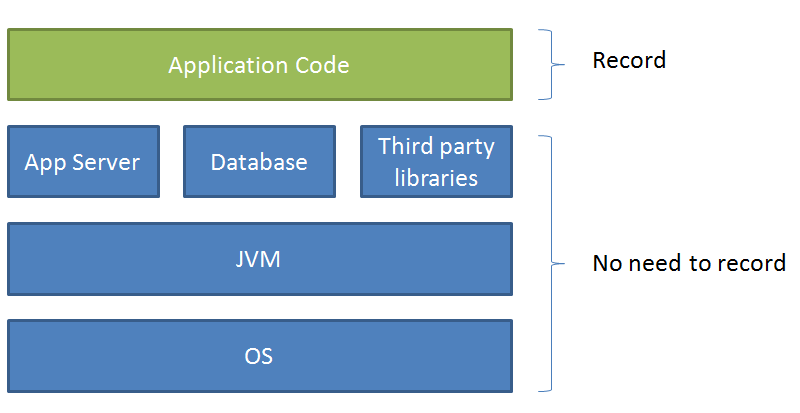 This also allows you to control the exact impact the recorder has on the performance of your program. Thus for example you may have a million line J2EE application but it spends most of its time waiting for the database or inside third party libraries or webservers. In this case the performance impact of the recorder will be extremely low since the time spent in ‘recorded code’ is very low.  This is also the reason why most web apps can get away with using platforms like ruby, python or php, all of which are much slower than java, because the time spent in that piece of code is very little.

On the other hand, you can have a 20 line program where all its does it do some massive calculation in a tight loop. In this case almost all the time is spent in recorded code thus having a much larger impact on performance.

In the next few posts I will describe how to tell Chronon what to and what not to record and the consequences of excluding code from recording when using the debugger.

In my last post I talked about ‘flusher threads’ which constantly ‘flush’ the recorded data from the memory buffer and persist it to disk.

However, due to the latencies in IO between memory and hard disk, it is entirely possible that your program terminates while there is still some data left in the memory buffer which hasn’t been persisted.

To solve this issue, we register a ‘shutdown hook’ with the jvm which essentially keeps your program alive for a little while even after it terminates, so that we can persist all the leftover data. That is why you may see messages like these  on your console when your program shuts down when its running with Chronon.

However using the shutdown hook opens a whole can of worms of its own.

Since the jvm does not impose any sort of ordering of how shutdown hooks are run, we essentially ‘stop’ recording at this point. Thus if you have any custom shutdown hooks of your own, those will not be recorded.

There are also issues where the shutdown hook does not run, in which case the recording would be considered corrupt.

Some of the cases when the shutdown hook will run are :

Cases when the shutdown hook does not run, thus leaving the recording in an invalid state :

That said, most of our used will be using eclipse to launch and terminate their programs, so I really focused on making that use case always produce a valid recording.

Eclipse by itself unfortunately doesn’t seem to be of any help in this case since the default red ‘terminate’ button sends a SIGKILL signal thus terminating the JVM instantly without waiting for any shutdown hooks to run. Thus if you use the ‘red’ button to terminate your programs running with Chronon, the recording will always be invalid.

So I went ahead and added a ‘blue’ button next to the ‘red’ terminate button.

Pushing the ‘blue’ button will make sure the shutdown hook runs and you always get a valid recording. The blue button is active only when a program is running with Chronon enabled and it is what you should always use to stop your programs from within Eclipse.

You can still use the ‘red’ button when say you were just experimenting with something and no bugs appeared or for some other reason you just don’t care about the recording, but we recommend making the blue button your default for stopping programs from now on.

The Chronon recorder had directly opposing goals – to collect as much data about your program as possible, while at the same time having the least possible impact on it.
In this post I will try to describe some of the design and architectural decisions I made to achieve that.

The prime design goals of the Chronon recorder were -

Scalability was higher on the list than raw performance. The reason being was that with a scalable implementation, even if you hit a performance wall with the recorder, you can always upgrade your machine/configure the recorder to continue recording.

To achieve this scalability, we made the following assumptions about how hardware is progressing:

The recorder works by running as a java agent and instrumenting the bytecode of your java program in memory, thus not requiring you to make any changes to your code.

By universal, I mean that the recorder should be able to record any Java app whether it’s a J2EE app, Swing/SWT app or any other kind of application.
It should also be platform independent, being in line with the Java philosophy of ‘Write Once, Run Anywhere’. Thus you can record on any platform say a Mac and playback on any other platform, say Windows.

How it all works

The recorder works as follows to achieve its design goals: 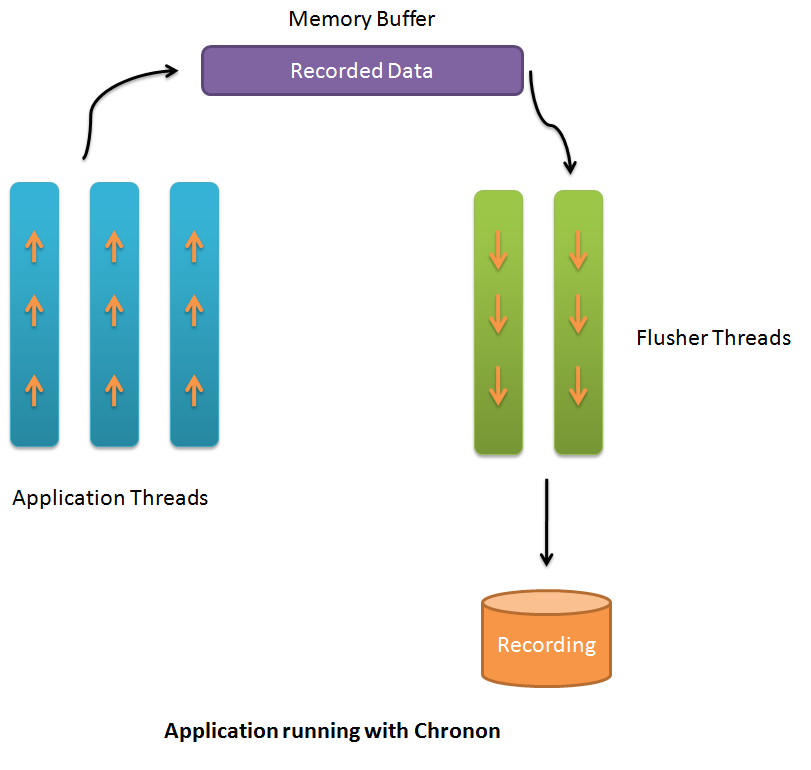 So how do our assumptions about hardware help with this? Lets take a look -

What about all the Garbage Collector  (GC)  issues with using all that extra memory?

It is a well known fact that current JVMs don’t handle heap sizes above 2gb very well. It is possible that if you have an extremely computationally intensive program that Chronon does generate utilize that much memory or that your application already is reaching the 2gb limit and Chronon makes it go over that.

To solve this issue we use a custom memory management. Thus even if the data generated by Chronon goes a little high, it wont have a heavy impact on the GC. It is common to see a 2-3gb Chronon heap shrink to a few hundred megabytes within a blink of an eye, which would ordinarily take many seconds or minutes without our custom memory management.  That said, in most development scenarios, the heap sizes wont reach even near that high.

But even that ain’t enough…

But even after all this you may run into hardware assumption 4 above. This happens when even though you have enough cores and memory, the application threads of your program are doing too much work and even the small overheard of the recorder directly on those threads is affecting the responsiveness your application.

We won’t go into details of how to configure this right now, but it’s suffice to say that any part that is excluded runs with absolutely zero overhead, just like it would run without the recorder. For calls to these ‘unrecorded’ methods, we will record just the input arguments and the return value on the call site, which is usually enough information for debugging purposes.